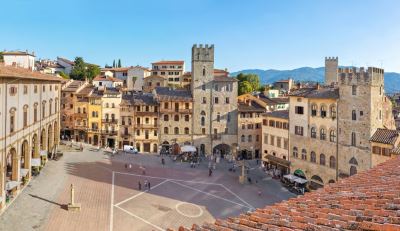 Piazza Grande the heart of the city of Arezzo

Piazza Vasari in Arezzo, more commonly known as Piazza Grande, opens in the heart of the medieval historic center of the city. It's like a treasure chest that encloses, in its trapezoidal shape, an unmistakable scenery, which for its particularly scenic appearance was chosen even by Roberto Benigni for the setting of his film La Vita è Bella (Life is Beautiful), awarded with an Oscar.

Piazza Grande is an alternation of buildings from different periods, its irregular shape and the extreme slope (in no other square the inclination of the ground is so marked), take us back to when it was the ancient 'Platea Communis'. Built around 1200 and then modified during the sixteenth century, it was the place designated for the meeting of citizens.

During the Middle Ages it became even more important thanks to the ancient Joust of the Saracen (Giostra del Saracino), which still takes place twice a year, with the square that acts as a backdrop, including a thousand colors, armigers, horses and knights, the commemoration of the ancient battle of Arezzo against the Saracens. At the time of the communal age the square became a place of commercial exchanges between the city and the countryside, and later in the Medici era, it was transformed into the center of the civil offices.

Among the buildings that characterize its shape, the Palazzo delle Logge, built in 1573 by Giorgio Vasari (1511-1574) and embellished by its famous loggia where you can still see the ancient craft shops and businesses, the Palazzo della Fraternita dei Laici dating back to 1300, with both Gothic and Renaissance facade and decorated by the subsequent addition of the bell tower with the clock of the sixteenth century. The Palazzo del Tribunale, located next to the Fraternita, is added to the outline of the square with an elegant semicircular staircase. Finally, there is the apse of the Pieve di Santa Maria, decorated with columns and capitals which all belong to different styles. The church has its facade, on the opposite side, on Corso Italia, the main street of the city. Finally, to further enrich the frame, there are countless palaces that retain their original medieval character with wooden balconies and crenellated towers, such as the Faggiolana Tower of the thirteenth century, the Palazzo Cofani Brizzolari and the Lappoli tower house, all dating back to 1200.

Piazza Grande gives a picturesque setting, as well as to the Giostra del Saracino, also to the Antique Fair (Fiera Antiquaria), which takes place continuously since 1968 every first Saturday and Sunday of the month.

Come and visit the city of Arezzo and its architectural wonders, stay in one of our villas or farmhouses, here a wide selection!!!!