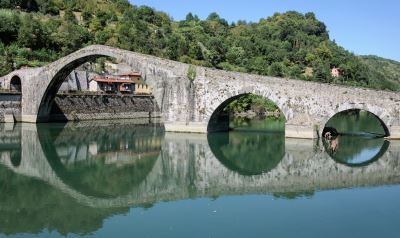 The most beautiful Tuscan bridges

Tuscany is not only villages, churches and beautiful landscapes, the whole region is rich in enchanted corners, places where time seems to have stopped. Also the many bridges which cross the Tuscan rivers tell much of the history of this land. Below some of the most beautiful and charming bridges of Tuscany, which are really worth to visit.

One of the most spectacular and photographed is certainly the Ponte della Maddalena, better known as Devil's Bridge. The bridge is located in the province of Lucca in the small village of Borgo a Mozzano, and its asymmetrical arches stands almost as a door to the Garfagnana region. According to the legend, the bridge was built around the year 1000 by Satan himself, who claimed the soul of the first who would have crossed it. But the people of the village proved to be smarter than him and let a goat cross the bridge first, thus making fun of the devil.

Impossible not to mention among the most important Ponte Vecchio, the bridge “par excellence”, known and loved all over the world and that was the only one in Florence not to be destroyed by the Germans during the Second World War. A special place for lovers for a romantic stroll, Ponte Vecchio, with its ancient goldsmiths shops, is surmounted by the Vasari Corridor, which is now part of the Uffizi museum. The corridor, which served as a secret passage, was created by the Medici family to unite Palazzo Vecchio to Palazzo Pitti.

The Romanesque bridge of Ponte Buriano in the province of Arezzo, crosses the Arno River and is located within a protected natural area of Tuscany region established in 1995. Its architectural structure, begun in 1240 and completed in 1277, catches the attention. With its mighty arches seems to float on the river, shallow in this stretch, but very wide because of the proximity of the Penna dam. Ponte Buriano’s bridge with its robust six-arched structure has withstood all the floods of the last 850 years, and has been able to overcome the destructive fury of the Second World War, despite the retreating German armies had undermined it. But with no doubt, the fact that makes it more famous is the controversy whether or not is the bridge in the background of Leonardo da Vinci's Mona Lisa.
Arezzo is a city to visit and live, in Arezzo you can find works by Piero della Francesca, Vasari, Cimabue ... Here a link to our proposals for villas and farmhouses in Arezzo!

A very pleasant view can be enjoyed from the pier of the town of Forte dei Marmi and a walk on this historic bridge overlooking the sea will bring you into the true spirit of one of the most famous towns of Versilia. Far from the streets of luxury shopping, you can rediscover a more genuine corner of the old Forte, the elderly out for a walk, the children playing and plunging into the sea, the inevitable fishermen and of course a stunning view of the Apuan Alps, that stand out above the village.

Equally remarkable, though less ancient, is the “Ponte Sospeso” (Suspended Bridge) of San Marcello Pistoiese. A footbridge built around 1920 with structures that rest on four steel cables held in tension, which overlooks the void up to 40 meters high, and connects the two sides of the Lima river without any intermediate support. With its 227 meters of extension in 1990 the bridge entered the Guinness Book of Records among the longest suspended bridges of the world. Walking through the “Ponte Sospeso” is a thrilling experience and above all an unforgettable adventure.