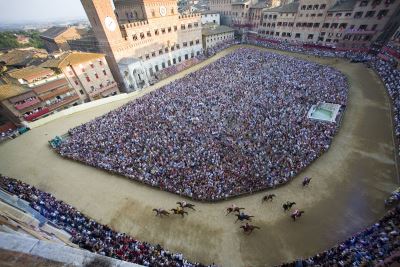 In the magnificent setting of Piazza del Campo of Siena, every year on 02nd of July and 16th of August, takes place the traditional and historical Palio di Siena, the most important event of the city.
But the Palio is much more than just an event for the people of Siena, it is part of their lives since their birth.

The “Contradaioli”, so are called the members of a Contrada (or city ward), participate in the life of their Contrada during all the year and live the Palio with great devotion, passion and transport.
The Palio di Siena is in fact a rather complex event, which throughout history has been enriched by many rules, customs and practices, many of which are known only to the Contradaioli.

Siena is divided into 17 “Contrade” established in 1729 by the Proclamation of the Governor Violante di Baviera: Aquila, Bruco, Chiocciola, Civetta, Drago, Giraffa, Istrice, Leocorno, Lupa, Nicchio, Oca, Onda, Pantera, Selva, Tartuca, Torre, Valdimontone. Each Contrada has its own crest and unique colors and occupies a certain area of the city.
Each “Contrada” is also like a small state, ruled by a Prior who is chief of a seat, and guided during the Palio by a Captain, assisted by two or three supporters called “Mangini”.
It besides includes inside its territory a church with all its possessions: relics, the Palio prizes, costumes, even of ancient date – flags, archives and everything concerning the life of the Contrada itself.
To the Palio race participates only 10 of 17 Contrade, 7 are those who have not raced the previous year, while 3 are randomly selected.
Horses and riders are bareback and dressed in the appropriate colors of their own Contrada.

A magnificent pageant, the “Corteo Storico”, precedes the Palio, and attracts visitors and spectators from around the world. The race starts from the 'Mossa', the square area delineated by two ropes. The 'Mossiere' has the task to call the Contrade, according to the order that was raffled off, and check that the positions allocated are respected.
The first 9 are positioned between the ropes, the 10th instead enters 'run-up', establishing in fact the start of the race. The race circles for 3 times the Piazza del Campo and horses and jockeys have to surpass even dangerous points, such as the sharp curve of San Martino, which often sees clashes and falls.

The first horse that reaches the finish line wins, even if 'shaken', ie without a jockey, and to the winning Contrada is handed the prize of the Palio, the so-called “Drappellone”, a canvas drawn each time by a different artist. After the race the victorious Contrada come with the Drappellone in the Church of Provenzano (Palio of July) or in the Duomo (Palio of August) for the 'Te Deum' of thanksgiving.

Palio di Siena It is really a magnificent event which we definitively suggest to assist once in a lifetime. Contact us for more information info@eurocasa.com tel. +39 0575 845348, and if you are interested in tickets for bleachers, balcony and windows over the Piazza del Campo.