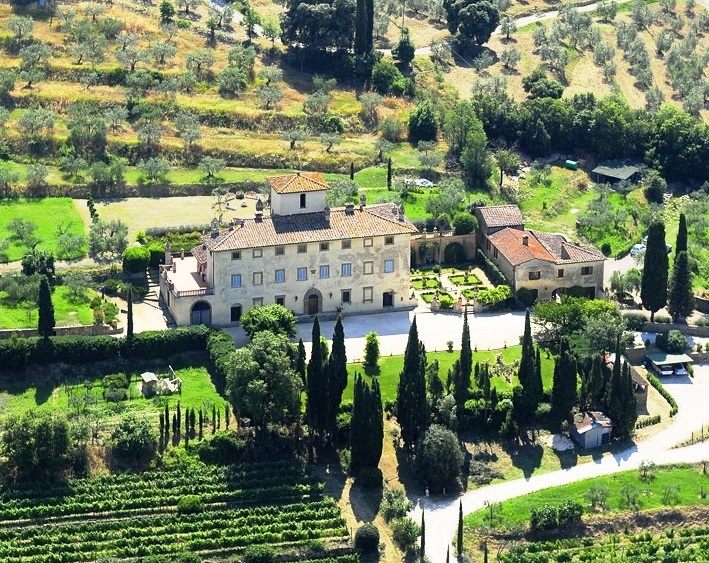 At Villa La Ripa, the art of the vineyard has been handed down for centuries. The old renaissance farmhouse, built around a tower from the year 1000, and the fine wine cellar are nestled on the gentle hills of the Chianti area of Arezzo near Siena and Florence, in the heart of Tuscany. Seasons, years, and centuries go by but the first goal at Villa La Ripa has always been to obtain wines of great quality and elegance, an authentic expression of the Tuscan territory.

Villa La Ripa is a splendid property located in Antria in the province of Arezzo. The first traces of this magnificent place date back to the second century AD. with Marco Peconio. However, the current shape of the villa is due to the Gualtieri, an important family of poets who acquired it during the Renaissance. After several changes of ownership, the villa was then purchased by the Luzzi family.

During the tour you will be able to discover many corners of this Renaissance treasure, such as the "secret garden" (typical Renaissance gardens which access was only granted to the owners), the chapel, still consecrated today, where you can admire a 16th century painting depicting the property.

This experience is free of mobility barriers and therefore makes it perfect even for the disabled or for those who travel in a wheelchair. 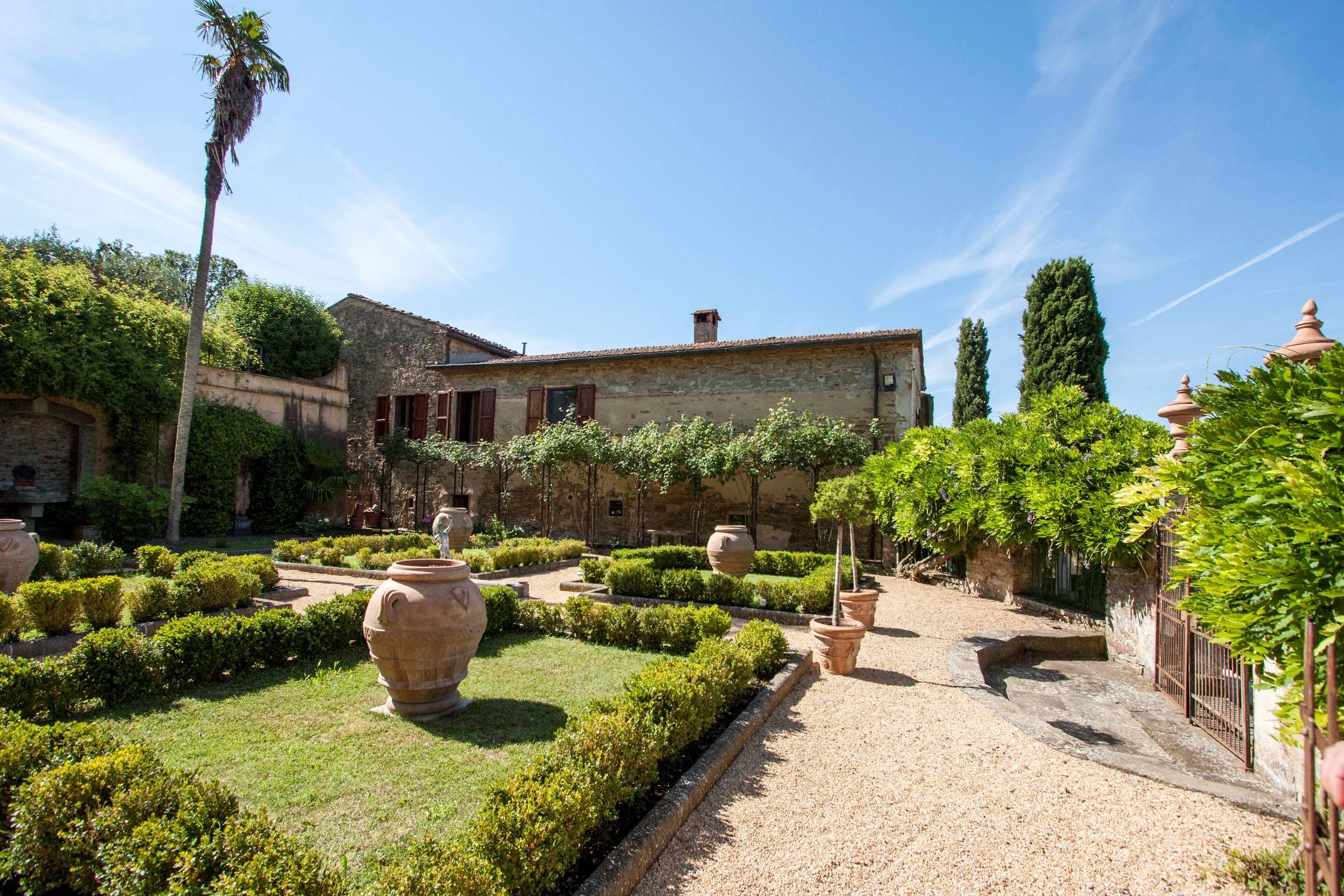 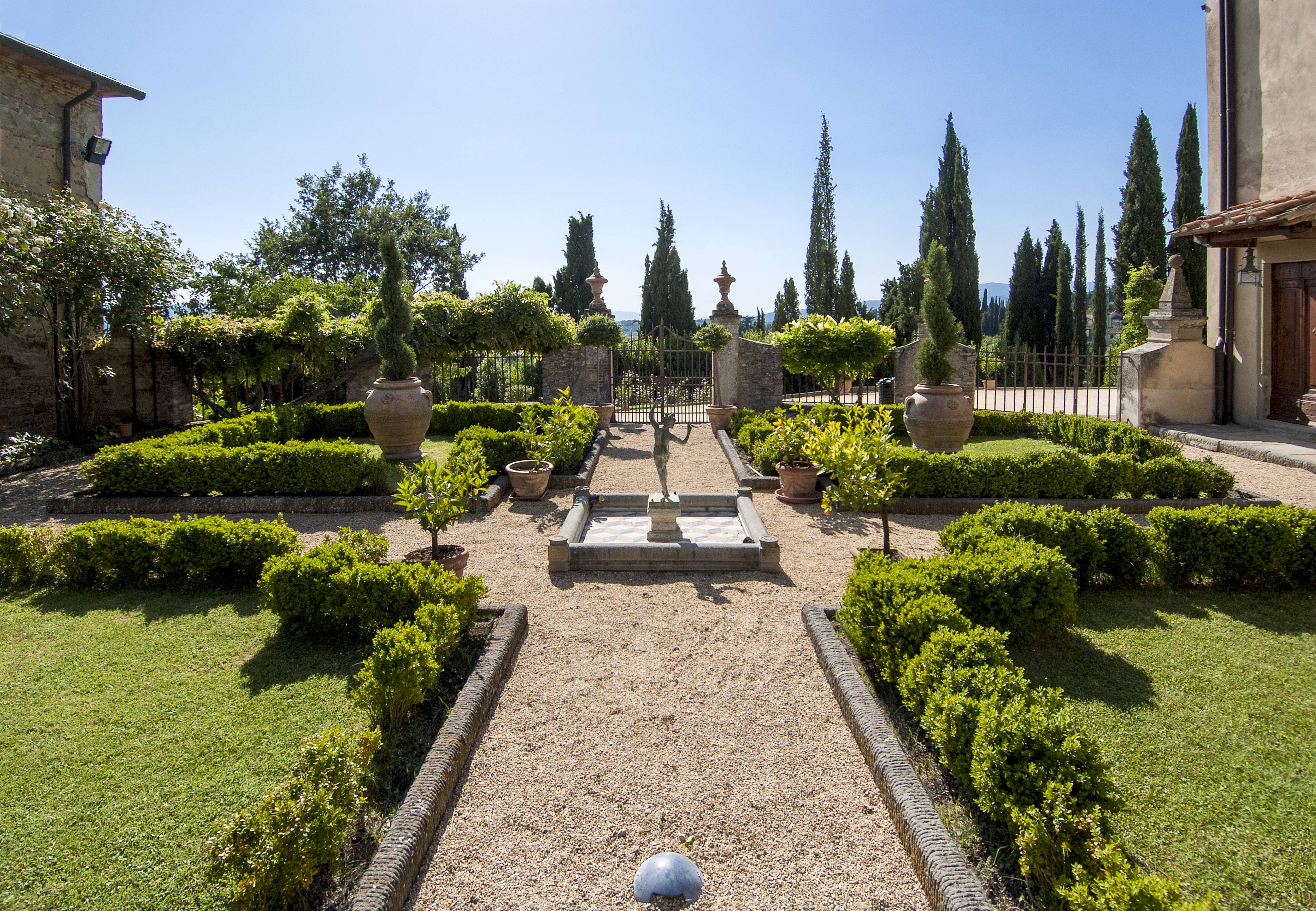 Currently the villa is located inside a farm that produces excellent wine, which y  ou can taste in two different formulas:

Rows and rows of Sangiovese, Merlot, Cabernet Sauvignon, Syrah, Canaiolo, Trebbiano and Malvasia are looked after with love and passion, both with head and heart, always in full respect of the nature, its perfect rhythms, and environmental sustainability.

All the best Tuscan wines in a single tasting, thanks to the collaboration between important companies. 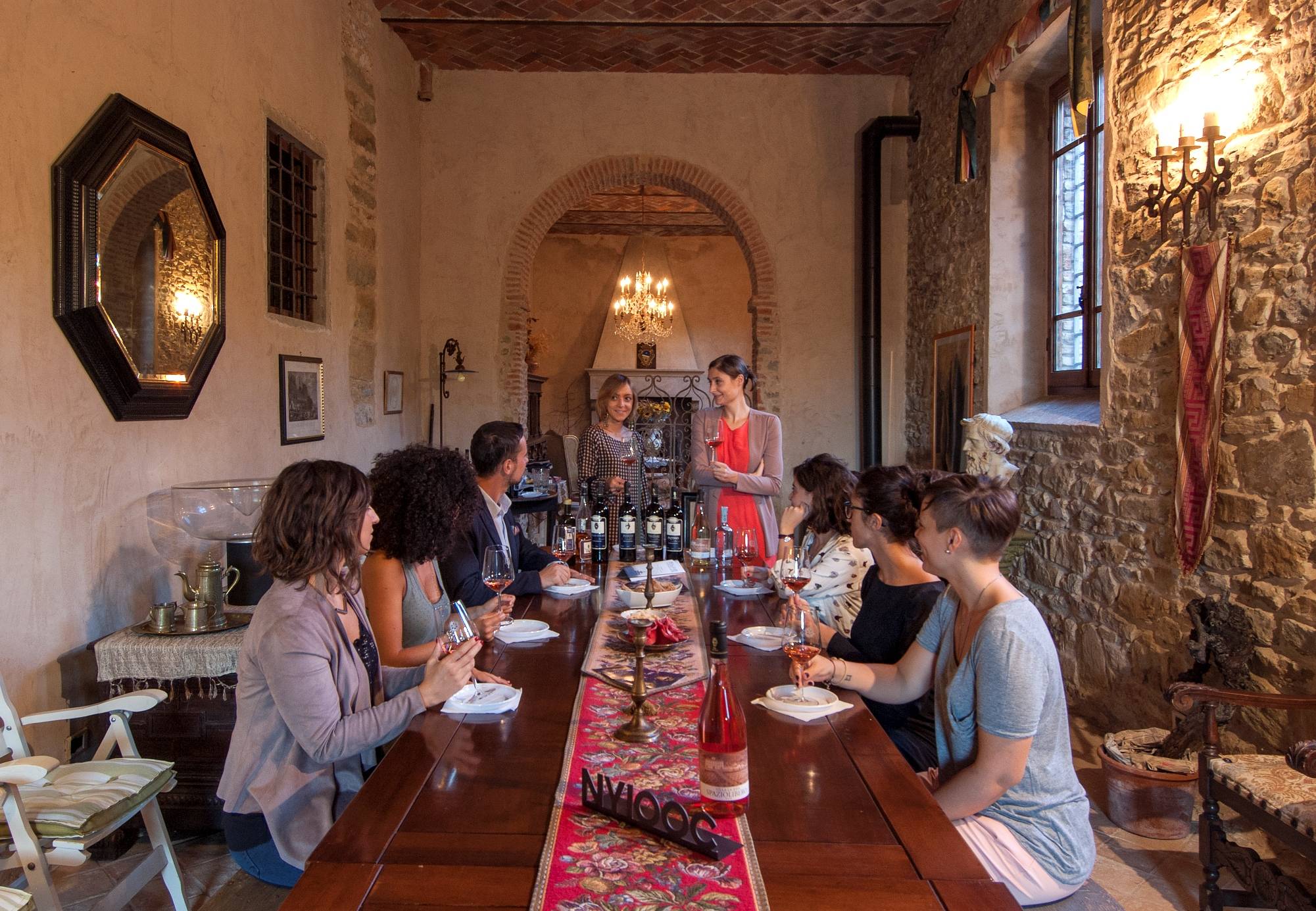 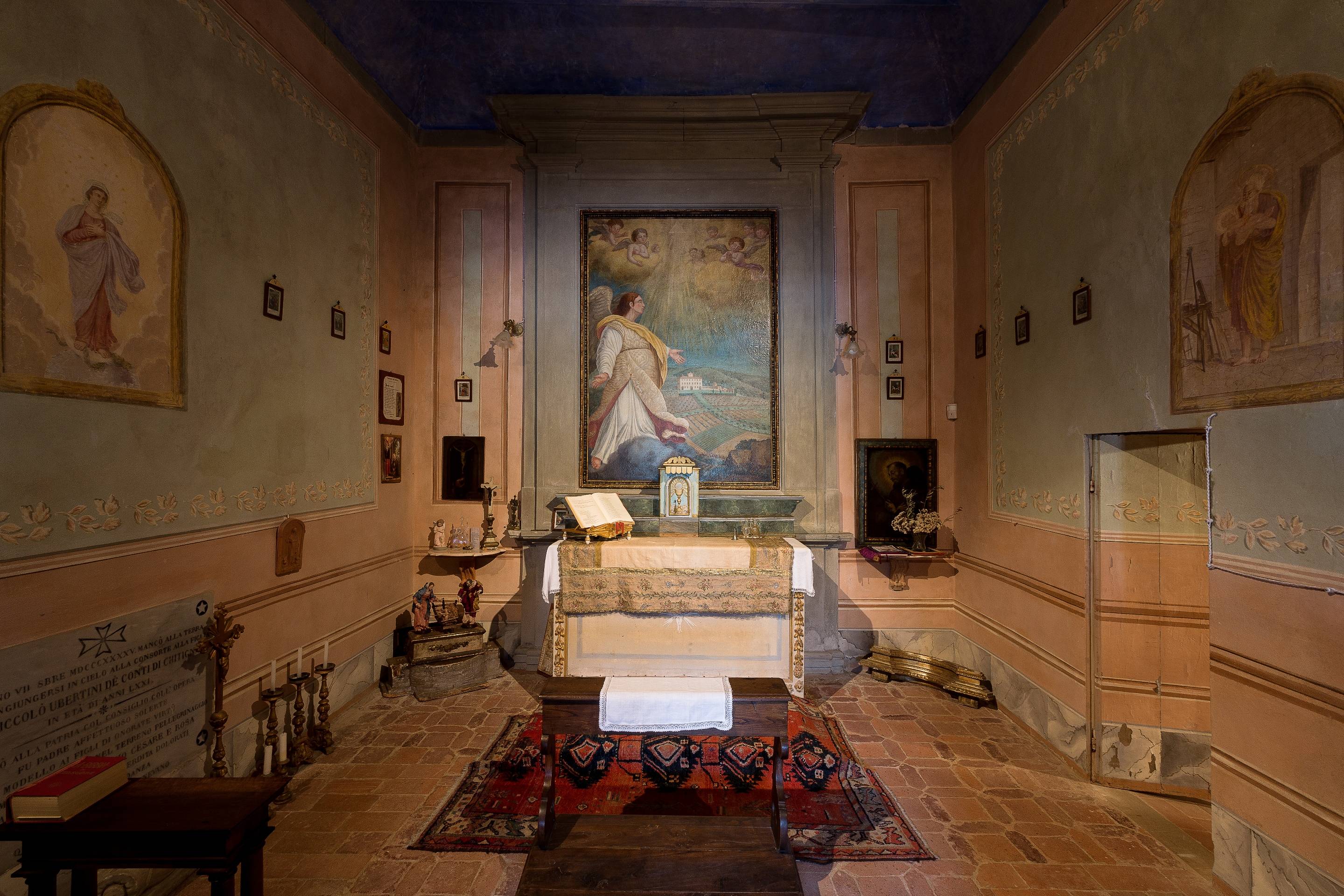 The cultivations of Villa La Ripa are part of the Chianti Colli Aretini sub-zone, taking advantage of a slightly sloping and medium-textured land located in a fairly windy area, between two small streams.

The oldest vineyard was planted at least 80 years ago; there are rows of autochthonous varieties of Sangiovese, Canaiolo, Trebbiano, Malvasia, and old cuttings of Cabernet Sauvignon and Syrah, a very curious peculiarity. The oldest vines are placed two metres apart with row spacings of three metres, according to the traditional Tuscan method.

The new ones have a higher planting density to encourage competition. This makes it possible to produce both a more traditional wine, closer to the classic Chianti, and a more innovative one, closer to the modern concept of the great “Super Tuscans”.

Contact us for a personalized quote, we will be happy to help you! 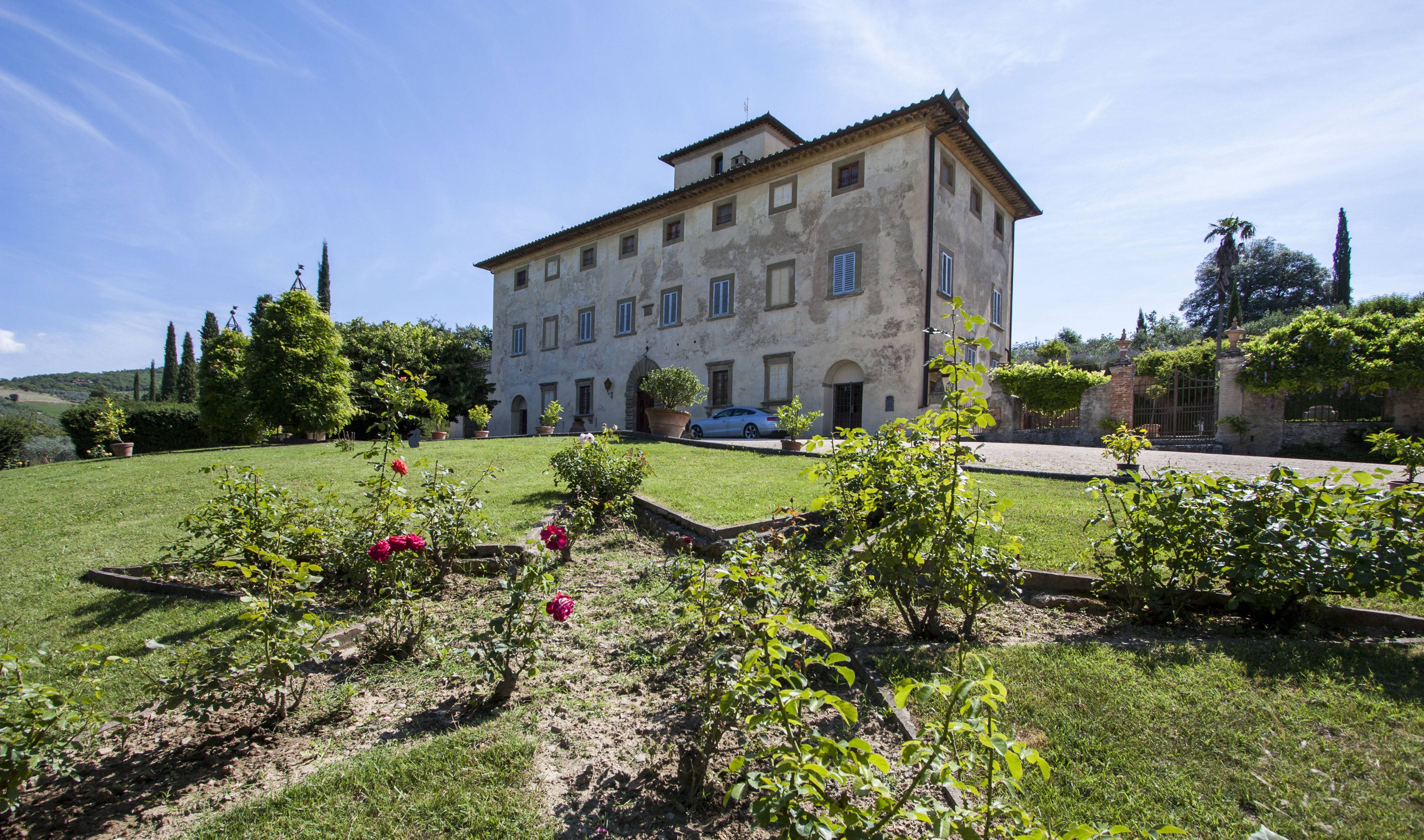 Ten Renaissance Villas not to be missed:

Emblem of Florence, cradle of the Italian Renaissance, Palazzo Pitti is the largest and most imposing of the Florentine palaces. It is placed on the Boboli hill and due to its location outside the crowded medieval city it was also equipped with an extensive Italian garden. Designed for the Pitti family by Brunelleschi, but built by his pupil Luca Fancelli, in 1549 it was acquired by the Medici who transformed it into their main residence and the center of power of the Grand Duchy of Tuscany. Its typically Renaissance structure has a facade of huge stone blocks, entirely covered by a balcony and high vaulted windows. In addition to the royal apartments and the Medici collections of the Palatine Gallery, it houses numerous museums, including the Gallery of Modern Art.

Residence of the Medici from its construction in 1464 at the behest of Cosimo il Vecchio, until 1540, when Cosimo I moved to Palazzo Vecchio, Palazzo Medici Riccardi contrasts the external sobriety with the internal elegance of the Renaissance noble residence that develops around the colonnaded courtyard interior built on a project by Michelozzo. The palace where Lorenzo the Magnificent also lived is now the seat of administrative offices and the Medici museum which allows a visit to the Chapel of the Magi frescoed by Benozzo Gozzoli and the majestic Luca Giordano Gallery decorated with the fresco depicting the Apotheosis of the Medici.

With an area of ​​over 35,000 square meters, the Ducal Palace of Mantua is one of the largest palaces in Europe. Official residence and center of power of the Gonzagas, it is a huge complex of buildings, courtyards, gardens, arcades and galleries. Among hundreds of rooms and halls, the most precious is the Camera degli Sposi, entirely frescoed by Andrea Mantegna between 1465 and 1474 at the behest of Ludovico II Gonzaga, considered an absolute masterpiece of the Lombard Renaissance.

One of the most emblematic Florentine Renaissance palaces, Palazzo Strozzi stands on the homonymous square in the city center. Built at the end of the 15th century by Filippo Strozzi, one of the wealthiest merchants of the time, it develops around an elegant internal arcaded courtyard. The history of the building and the various stages of its construction are told in the small museum on the ground floor. The complex is one of the most important exhibition spaces in Florence and also houses the National Institute of Renaissance Studies.

One of the most famous Renaissance palaces in Italy, Palazzo dei Diamanti was designed by the architect Biagio Rossetti as the fulcrum of the Addizione Erculea, the plan to expand the urban dimension of Ferrara desired at the end of the 15th century by Duke Ercole I d'Este. The ashlar, made up of 8,500 diamond-point faceted marble blocks, gives its name to the building now home to the National Picture Gallery, which boasts works by painters from the Ferrara school from the thirteenth to the seventeenth century, while one floor houses the temporary exhibitions of the Gallerie d 'Modern and Contemporary Art. 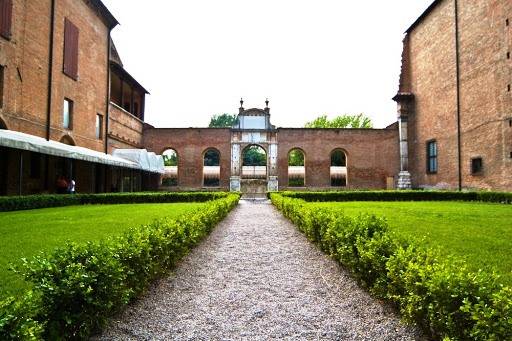 Urbino  reached its peak during the Renaissance, when Duke Federico da Montefeltro established one of the most illustrious courts in Europe. Symbol of that sumptuous period is the Palazzo Ducale, one of the most impressive in Italy, declared a Unesco World Heritage Site together with the historic city center. Built in the second half of the 15th century, together  with the urban transformation of the old village along the lines of the ideal Renaissance city, the Palazzo Ducale includes courtyards, lounges, loggias, apartments and a vast network of service rooms, including the famous Studiolo del Duca, covered with splendid inlaid wood panels. Today it hosts the Archaeological Museum and the National Gallery of the Marche which boasts one of the most important collections of Renaissance paintings in Italy. 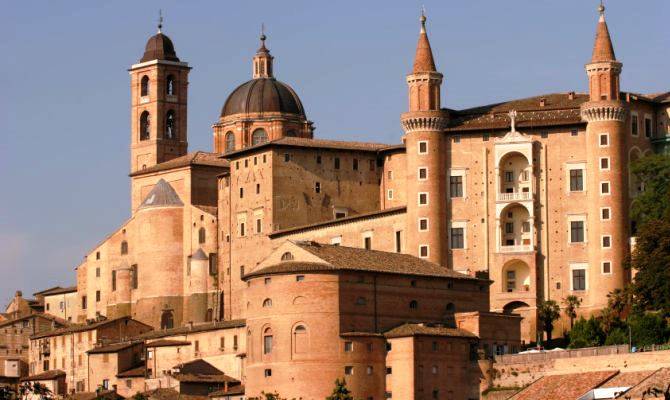 The splendid Renaissance residence built by Enea Silvio Piccolomini, who was Pope with the name of Pius II, is located in the small town of his birth in the heart of Pienza. In 1459 Rossellino was called to build what is a real palace, inspired by the Palazzo Rucellai in Florence, to house nobles and cardinals. Characteristic of the dwelling is the internal loggia, overlooking the hanging garden from which the view sweeps over the Val d'Orcia.

Fulcrum of the vast possessions of the Farnese in upper Lazio, the villa of Caprarola dominates the ancient village of the region of Viterbo with its massive mass. Designed as a fortress by Antonio da Sangallo the Younger, an expert military engineer, it was completed in the second half of the 16th century by Vignola, who transformed the initial project into an elegant Renaissance palace while retaining its particular pentagonal shape and surrounding it by a magnificent Italian garden.

It dominates Florence from the top of Monte Morello, what is considered one of the most beautiful Medici villas, a typical example of a suburban Renaissance residence. A tower of medieval origin characterizes the external structure, enlarged in the second half of the 16th century, when the magnificent terraced garden was also built. The heart of the building is the covered courtyard, entirely decorated with frescoes by Cosimo Gaddi and Volterrano representing the Medici splendor.

Villa Almerico Capra, better known as La Rotonda, is the most famous and visited of the villas of Andrea Palladio. The circular building project with a dome is inspired by the Pantheon in Rome and reflects the humanistic canons typical of Renaissance architecture, that’s why it is considered an icon of perfection. Built starting from 1567, externally it has four porticoes with pediments supported by Ionic columns and embellished with statues of classical divinities. The interior, on the other hand, revolves around the circular central hall, which gives the villa its name, surmounted by a magnificently frescoed dome, illuminated by a lantern