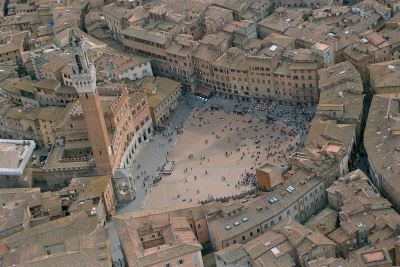 Piazza del Campo in Siena, famous throughout the world for its architectural beauty and its particular 'clamshell' shape, lies in the junction point of the three hills on which the city stands and it is where the Palio di Siena takes place twice a year. Piazza del Campo each year attracts millions of tourists from around the world.

The earliest records date back to 1169, and relate to the whole valley, therefore including the nearby Market Square, the square from which it was divided in 1193. During the government of the “Nove” until 1270 the square was used for fairs and markets. And during this period, after the construction of the Town Hall (the seat of government of the city), began the paving of the square, and the subdivision into nine segments, in memory of the Government of the “Nove”, is still visible. The profile and structure of Piazza del Campo were outlined in time, through laws enacted by the government of Siena to define spaces, facades and architectural fronts, who later designed the profile and the perimeter of the square we know nowadays.

The “Fonte Gaia” is the fountain located at the highest point of the square, its name derives from the first time the water flowed in Piazza del Campo. The marble fountain, from Jacopo della Quercia, has an important artistic value, with a series of statues and bas-reliefs dated between 1409 and 1419, is considered one of the greatest artistic and sculptural Italian expressions of the 15th Century. Today in the square there is a copy of the fountain, made by Tito Sarrocchi in 1869. The marble originals are kept in the Museum of the Hospital of Santa Maria della Scala in Siena.

The “Palazzo Pubblico”, built between 1288 and 1342 in Piazza del Campo, is one of the most elegant and imaginative examples of Gothic architecture. It was the seat of the Government of the “Nove”. It now houses the “Museo Civico” and the council of Siena. Inside the museum are kept numerous masterpieces of Siena such as frescoes, paintings and sculptures. By the first half of the '300 was built the hall of the Grand Council (Salone del Gran Consiglio), and later were added the two lateral wings. The lower part of the building is dotted with characteristic Sienese arches, and at the center of the facade in 1425 was placed a copper rose window depicting a monogram of Christ.

On the left side of the Town Hall, the Torre del Mangia, a slim and elegant brick building, 88 meters high and with stone ornaments, perhaps drawn by the famous Filippo Memmi and built by Muccio and Francesco Di Rinaldo from Perugia. From its summit, reached climbing four hundred steps, you can admire a wonderful panoramic view of Piazza del Campo and the rest of Siena city centre. The name of the tower is due to its first bell-ringer, Giovanni di Duccio, said the Mangiaguadagni. In the “Museo Civico” there are some of the most important masterpieces of the Sienese art. In the largest room, the hall of “Mappamondo”, are preserved two masterpieces by Simone Martini as well as important works of Bernardo Rossellino, Domenico di Niccolò, Jacopo della Quercia, Spinello Aretino, Domenico Beccafumi and wonderful sculptures of the famous Giovanni Duprè.

Siena, its millenary history, its architectural beauties and the beautiful surrounding countryside await you, book with us your villa or your holiday home in one of the most beautiful areas of Tuscany !!!